My second pattern! Here's another in-training digimon. Hope you enjoy! As always, let me know if there are any mistakes. 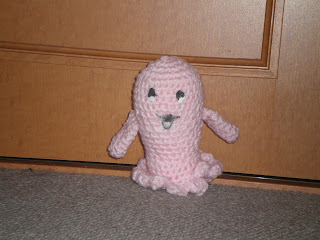 Repeat Rnds 1-5 of head.
Fasten off, leaving a tail for sewing.
Finish stuffing.
Sew to Rnd 22 of body.

With a marker (fabric probably works better, but any kind will do), draw eyes and mouth as shown. Cut and stick to head.

Digimon is copyright of Bandai/Toei Animation. Please do not sell this pattern or post it to your website. You may link to this page.
Posted by GundamGirlWing at 2:43 AM No comments:

Promote Your Page Too